The earliest recollections of a Military Aero Club in Albuquerque go back to the late 1950s. The base, which was under the control of the Army, had two military T-34s and a Cessna 190. The aircraft were parked near the old tower and the club office was located in an old firehouse. The aircraft were only available to rated military pilots and no training was provided.  In 1959, the military club moved to Sandia National Laboratory’s area and merged with the Sandia Flying Club. The Sandia Flying Club had a dirt runway located approximately 4 miles south east of what is now Kirtland’s golf course.

Historical accounts pick up in 1968. The Sandia Club had been closed due to an accident. In February, the Commander, General Miller, reopened the club and appointed Paul Murphy the manager. The club was relocated to an area south of Base Operations, Hangar 333. The aircraft complement included two T-34s, a Cessna 150, and two Navions. Membership was small, only four or five pilots and about as many students. The manager brought in some instructors and started a ground school. Seven of the ten ground school attendees went on the get their pilot certificates. Mr. Murphy left for the summer and during his absence, the club experienced another accident. The club remained closed until Mr. Murphy returned in the fall.

The next year, Mr. Bob Dubois, picked up management responsibility for the club. The club

acquired a Citrabria and offered aerobatic lessons. Club members were also allowed to park their private aircraft on the field.  In 1971, Mr. Jim Brewer moved into the manager’s position. Mr. Ralph Hinshaw, who later became the club’s Chief Flight Instructor and a Designated Pilot Examiner was a staff instructor. His wife, Gloria, would eventually become the Kirtland Aero Club Manager in 1989.  The Sandia Flying Club closed and Sandia Base merged with Kirtland AFB. The club moved to an old WW I building on Kirtland’s east ramp. At that point, the club had four T-41A military trainers and two Cessna C-172 aircraft (the civilian version of the T-41A). Throughout the years that followed, the club moved all over Kirtland. Locations included a trailer parked on the east side of Hangar 333, a trailer move to the ramp east of Hangar 482, an addition on the corner of Hangar 482, and back into Hangar 333, where it resides today.  Ms. Joanna Erni, the current manager, took over following Gloria Hinshaw’s retirement in 1996. 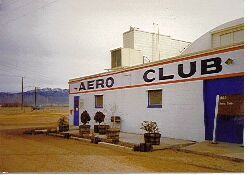 The Kirtland Aero Club name changed to the Kirtland Flight Center in 1997 in response to an Air Force initiative.

Kirtland has also had a variety of different aircraft. In addition to the ones previously mentioned, the club offered Cessna 152s, Cessna 172RGs, Cessna 182s, Cessna 182RGs, Cessna 210s, Piper Arrows (turbo and non-turbo versions), a Piper Warrior, and a Decathlon. Multi-engine aircraft included a BeechCraft Duchess, and a Cessna 310.

The flight center is constantly looking for people to support this organization.  Not only  the student pilots, but also private pilots, CFII’s and people willing to help keep the flight center operating smoothly for years to come.